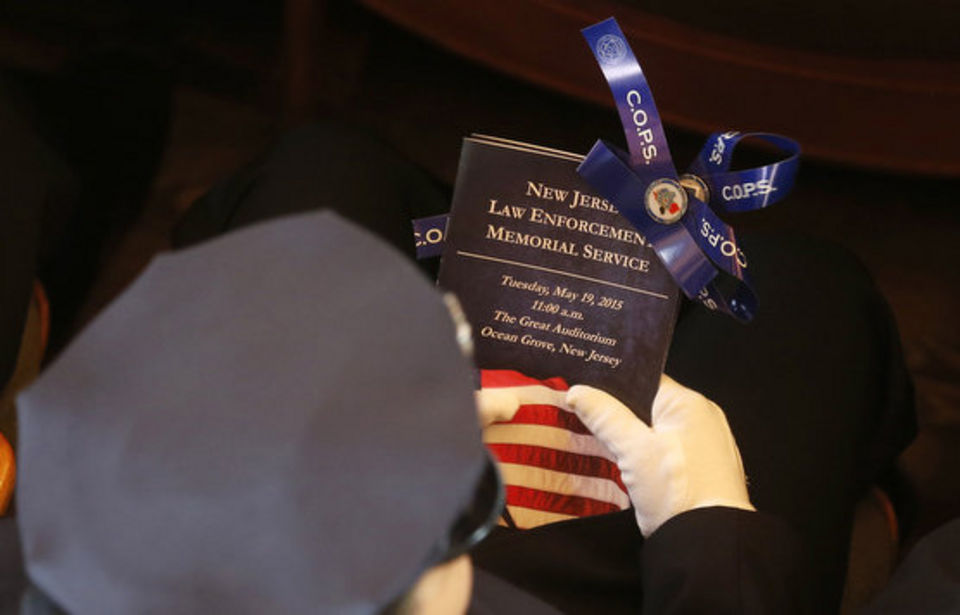 NEPTUNE – Members of law enforcement from across the state gathered Tuesday at The Great Auditorium to honor and     remember five officers who died in the line of duty over the past year. 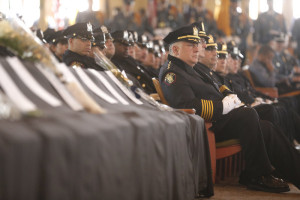 During the ceremony, acting state Attorney General John Jay Hoffman said that while his heart was heavy with the loss of the officers, he recognized that they all wanted to protect and serve. He said that it was “remarkable” that each of the officers put themselves in danger so the citizens could be safe.

“That is incredible courage, that is unspeakable generosity of spirit and what awe-inspiring humanity,” he said.  Hoffman said the fallen officers, no matter their ages, were too young to die.

“They chose to be on the front lines. They wanted the responsibility of protecting others and they sought the opportunity to make the world a better place by taking action, not by wishing it so,” he said. “These men did not exist in the margins. They put themselves on the lines to keep guns, drugs and other threats out of our neighborhoods and away from our children.”

Gov. Chris Christie honored the families of the fallen officers and presented each with a plaque.”Yes, we are here to honor the memories of those who have served and given their lives, but we are here just as much to honor their families for the continuing sacrifice that they make each and every day from the end of their loved one’s life,” he said during the keynote address.

Photos of all of the fallen officers in the state were projected on a screen as pipes and drums played “Amazing Grace.”

Santiago was fatally shot on while responding to a report of an armed robbery at a Walgreens store. Goodell died after a tractor-trailer crashed into his marked patrol car on the side of Route 17. Arocha died after going into cardiac arrestwhile on duty in the Fourth Precinct in the city. Petruzzello died after he was struck by a car while crossing the street. Stevens died after a single-car crashwhile on duty.

Prosecutor Joseph Coronato attended the ceremony with the Stevens’ family. The detective was an undercover officer with the Special Operations Group and would have completed 15 years with the department in April.

“It’s a tribute to all these truly fallen heroes that have given the ultimate sacrifice, which is their life,” Coronato said. 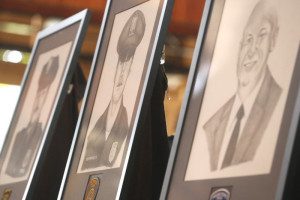 “It’s important to their loved ones and their co-workers to understand that we acknowledge their dedication and that we never forget.”

Coronato said ceremonies such as the memorial service show that the community never forgets the sacrifice of the fallen officers.

“There will always be an emptiness with us, but it’s part of the healing process when you have such a loss both for the law enforcement family and obviously for the immediate family,” he said.  Stevens’ father, John Stevens, said his son cared deeply and “would go the longest yard” to get things done.

“I thought it was a wonderful ceremony and they were very gracious to the loss of these men and honoring them,” he said.

Stevens described his son as a dedicated man who loved both his family and the community.

“He has a wonderful warm heart and he had a tremendous sense of humor,” Stevens said of his son. “When he played, he played hard, and he just loved family and community.”

At the memorial service, the family of fallen Newark police officer Arocha wore shirts with his picture on it. Arocha was a 23-year veteran of the force.