CAMDEN – A Camden County Police officer was honored Monday at the department’s Camden headquarters for his work to reduce bullying and violence at city schools.

Lt. Jeremy Merck received the Teach Anti Bullying Medal of Honor from the nonprofit of the same name on Monday.

“Lt. Merck exemplifies the vision and mission of promoting a nonviolent and safe community. He has displayed the awareness needed to further help bring reduction and education to this ever-pervasive issue of bullying within the Camden City Community,” said Dr. Claudio V. Cerullo of Teach Anti Bullying, Inc. “As a law enforcement leader, he clearly understands how to bridge the gap between our youth and our community, so that greater awareness is reached.” 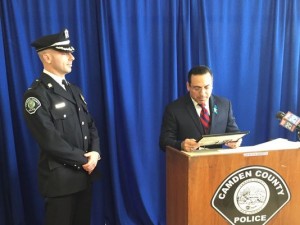 Jeremy Merck, who joined the force in 2013 after eight years as an Evesham Township police officer and four years in the U.S. Marine Corps — including combat tours in Iraq ad Afghanistan — is Camden County Police’s commander of day-to-day police operations and a graduate of the CIT-NJ Center of Excellence 40 hour Program.

“Jeremy shows the positive impact that law enforcement can have in their community and is the reason community policing works in Camden County,” said Freeholder Director Louis Cappelli Jr. “There is no substitute for taking the time to make an impact on a child’s life.”

Merck is a volunteer at J. Torres Tae Kwon Do Academy in the city’s Fairview section, teaching martial arts to children as young as 4 years old.