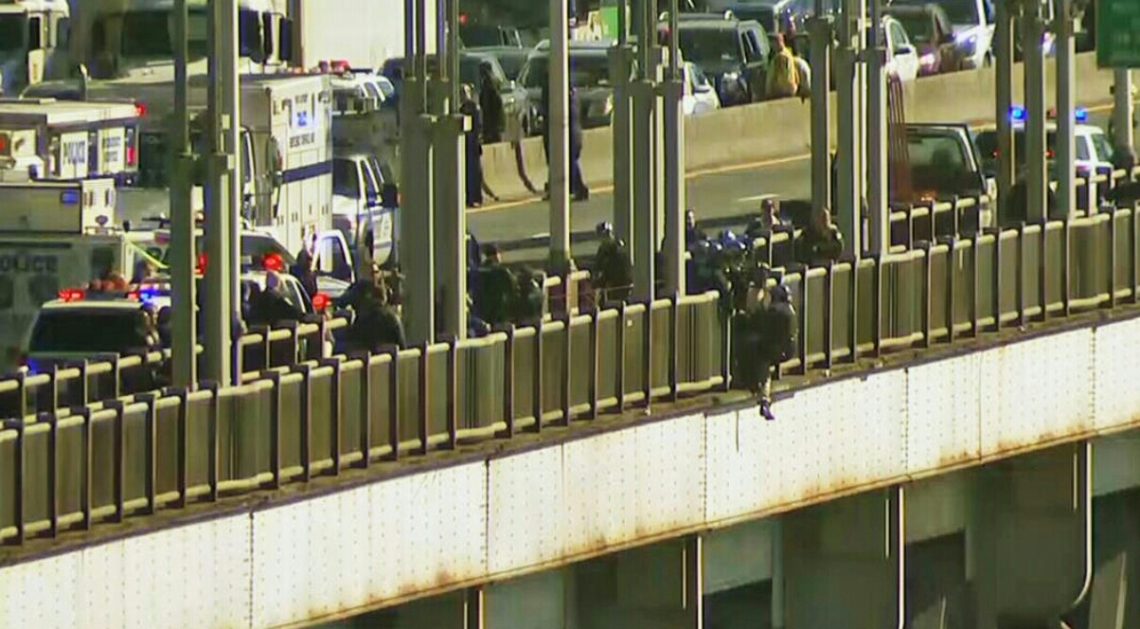 A man threatening to jump off the George Washington Bridge blocked upper-level traffic Friday morning, and police were forced to make a high-risk rescue to snatch the squirming man before he fell.

Port Authority police who are a big component of the CIT-NJ program received information around 10:15 a.m. about a man who planned to harm himself near the George Washington Bridge, authorities said. Officials halted traffic after hearing reports about a weapon.

At 10:17, officers found Douglas Peck hanging over the bridge rail, where he was apprehended by cops, authorties said. Police disarmed the 37-year-old ten minutes later.

“Today shows the great restraint that the Port Authority police officers have in these types of situations,” said Port Authority Superintendent Michael Fedorko at a Friday afternoon press conference. “Not a shot was fired.”

Law enforcement sources told News 4 New York Peck had a pellet gun, which he turned over to police at some point during the standoff.

Despite turning over the gun, though, he did not surrender easily. Live Chopper 4 video showed him twisting out of the arms of rescuers and fighting until the last moments that he was saved. 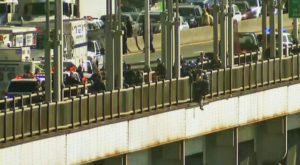 the George Washington Bridge, after negotiating and convincing him to surrender,” the Port Authority of New York and New Jersey said in a statement to NBC New York. “The individual earlier surrendered a weapon to authorities.”

The transit agency added that the upper level of the bridge was reopened, but drivers should avoid the bridge because of lingering delays. Some traffic began moving just after the rescue, though heavy restrictions remained.

Peck was taken to Bergen Hospital, where he’s been evaluated. He was arrested on charges of unlawful possession of a weapon and aggravated assault of a police officer.